All about the smoke we breathe in cities. How can you effectively eliminate it?

As the world around us becomes more polluted and overpopulated, engines continue to emit pollutants into the atmosphere, industrial monsters keep polluting our atmosphere, and half of the entire population lacks access to clean water, air and still use old dirty technology, such as stoves and lamps, the levels of air pollution we breathe are becoming increasingly dangerous - 9 out of every 10 people ibn crowded cities now breathe polluted air, resulting in 7 million deaths annually.

Air pollution has severe health consequences - one-third of deaths from stroke, lung cancer, and heart disease are caused by air pollution. This is equivalent to exposure to tobacco smoke and far more serious than the effects of consuming too much salt, for example.

How can we reduce contaminations from the air?

Climate change and air pollution may seem like very different and unrelated problems, but in fact, they are very closely related, so by reducing air pollution we are also helping to combat climate change. Air pollutants include not only greenhouse gases - mainly carbon dioxide, but also methane and others - but there are also many related issues: these two problems often interact with each other.

For example, air pollution in the form of dispersed particles from diesel engines circulates around the planet, reaching the most remote corners of the Earth, including the polar regions. Falling on ice and snow, the particles slightly darken the surface, reducing the reflection of the sun's best back into space and consequently contributing to global warming. In turn, slightly higher temperatures allow vegetation in the Subarctic belt to grow a bit larger and, as it sprouts through the snow, cast a shadow whose area, multiplied by millions of small plants, also contributes to the darkening of the Earth's cover, leading to further warming.

No one is immune to the pollution that comes from the five major anthropogenic sources. These sources spew a number of substances into the atmosphere, including carbon monoxide, carbon dioxide, nitrogen dioxide, nitrogen oxide, ground-level ozone, particulate matter, sulfur dioxide, hydrocarbons, and lead, each of which is harmful to human health.

The major source of air pollution at the household level is the indoor combustion of fossil fuels, wood, and other biomass for cooking, heating, and home lighting. Indoor air pollution causes 3.8 million premature deaths per year, the vast majority of which occur in developing countries.

In many countries around the world, electricity generation is a major source of air pollution. Coal-fired power plants are a significant contributor to air pollution. A growing concern is the use of diesel generators in areas not connected to the general power grid. Industrial manufacturing processes and the use of solvents in the chemical and mining industries also pollute the air.

The global transportation sector accounts for nearly a quarter of the carbon dioxide emissions associated with energy consumption, and this share continues to increase. These transportation emissions are closely associated with nearly 400,000 premature deaths. Nearly half of all deaths due to vehicle air pollution are due to diesel engine emissions, and those who live in close proximity to transportation highways are 12 percent more likely to be diagnosed with dementia.

There are two main sources of air pollution in agriculture: livestock, which emits methane and ammonia during their lifestyles, and the burning of agricultural waste. Methane emissions contribute to ground-level ozone, which causes asthma and other respiratory diseases. Methane is also a stronger contributor to global warming than carbon dioxide, causing 34 times more climate change over a century of records.

The open burning of garbage and the dumping of organic waste in landfills releases harmful dioxins, furans, methane, and black carbon into the atmosphere. Worldwide, approximately 40 percent of waste is incinerated outdoors. The problem is most acute in regions that are rapidly urbanizing and in developing countries. Open burning of agricultural and/or municipal waste is practiced in 166 of the 193 countries.

How can you protect yourself from smoke or polluted air inhalation? 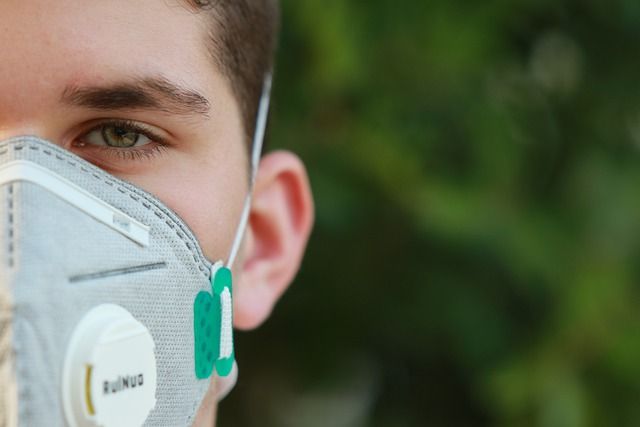 If you think that medical disposable masks can solve your health problems, you are wrong. You've probably seen more than once people in town wearing medical masks. But in fact, a medical mask only partially protects you from the harmful substances in the air and is only able to trap a fraction of the harmful particles and only for a very short time. Instead of using medical masks, here's what you should do to protect yourself from the dirty air within the city limits.

Of course, the best way to protect yourself from dirty air in the city is to stay outdoors on days when the concentration of pollutants in the city is much higher than normal. This is especially true when the weather outside is hot. But of course, we can't sit at home all summer. Especially if the smoke or gassiness of city streets and highways can be for a long time.

And so, here are tips to help you reduce your exposure to harmful substances in city air:

In that case, think of a route that goes through parks and tree-lined avenues. That way you can reduce your body's exposure to polluted air a bit.

How can we stay healthy in polluted cities?

The importance of regular dry and wet cleaning, the need to ventilate and humidify the air is now known to all. Household hygiene products are sufficient if you live in an eco-friendly area in your own home with good ventilation. But not everyone is so lucky, and most people living in urban apartment buildings have to think about additional air-cleaning measures.

For maximum protection for your body when the air in the city is very smoky, you should buy a special mask that covers your nose and mouth and is able to trap harmful particles for a long time.

You can not affect the air quality in the street, but at home..

There are many systems that position themselves in terms of improving the air quality in the apartment, but not all of them actually have the necessary functionality:

Filterless air purifiers are devoid of these disadvantages and can be very effective using several purifying technologies. The principles of its working are absolutely different from filter systems. Filterless air purifiers fill the indoor air with negative and positive ions, safe concentration of ozone and hydroperoxide ions. All together they are the most effective odor, pollution and bacteria fighters. You can find a wide variety of such filterless air purifiers on the website of EcoQuest. Test it for free to make sure that the quality of your air will noticeably be improved.