Healthy tips on protecting from indoor and outdoor pollution

It is not surprising that a “cocktail” containing gas and heavy metals may be harmful to the body. How to protect yourself from polluted air? The harmful substances contained in the city air irritate the respiratory tract: larynx, trachea, bronchi, lungs. In addition, if the air is too polluted, it is more difficult for the cells of the mucous membrane of the respiratory tract to "wrap" dust particles in mucus and remove them outside (for example, when coughing or sneezing).

Air pollution is a burden on the respiratory system. It can lead to a variety of problems: allergies, frequent colds, headaches. And the sooner people encounter an “unfriendly” external environment, the more difficult it is to cope with the consequences of its influence.

Doctors from the International Committee for the Cleanliness of the Environment found that due to air pollution over the past 40 years, the number of heart diseases has increased by 40%, cancers - by 33%, and the number of deaths from a heart attack has increased by 60%. Most cities in the world are choking on car exhaust fumes. The megacities of the world are shrouded in fog all the time. Exhaust gases contain large amounts of soot particles and toxic chemicals. The level of carbon dioxide in the atmosphere due to cars has risen almost 1.5 times over the past hundred years. 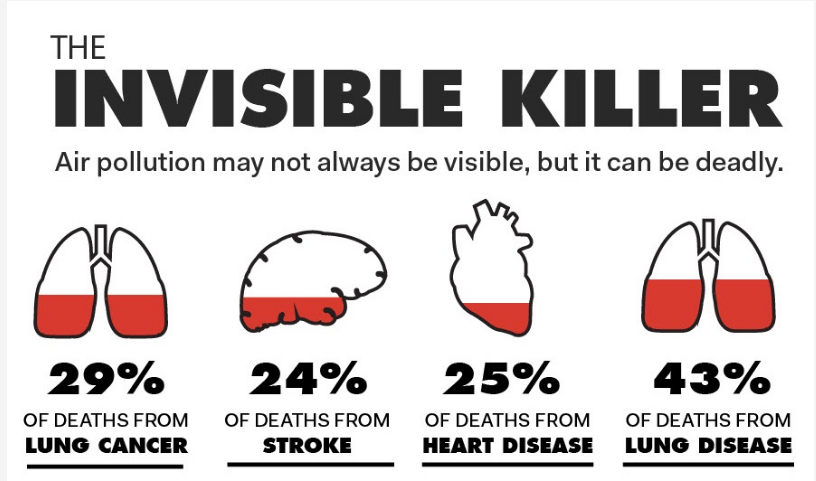 Experts have found a clear link between exposure to high levels of pollution and enlargement of the right and left ventricles, important pumping chambers in the heart.

These changes can be compared to the condition of a person who leads an inactive lifestyle or has high blood pressure.

However, people are not satisfied with any of these facts. Everyone understands that it has become unsafe to breathe air in cities, and they are trying to find ways to solve this problem. Let's consider the main options that can help not only in this situation but also in similar ones when the level of air pollution becomes too high again.

To understand how to escape from polluted air, you need to know what exactly it contains. So it will become clear from what substances it needs to be cleaned. The most common form of air pollution is smog. This is what is now observed in large cities in Europe and America. Smog contains various substances that occur when any type of fuel burns. But the most dangerous are CO and SO2. Carbon monoxide (oxygen oxide - CO) It has no color, taste, or smell. Usually, cars are considered to be the source of its appearance in the city. That is, it appears due to the emission of exhaust gases into the atmosphere. Also, its sources can be fires, burning leaves, peat bogs.

How dangerous is carbon monoxide for humans? The more it is in the air, the less oxygen the cells of our body receive. As a result, the head starts to hurt, heart problems appear. Carbon monoxide also weakens the immune system, which leads to all kinds of diseases. Sulfur dioxide gas (SO2) This gas is also colorless. But it already leaves an unpleasant taste in the mouth, irritating the mucous membranes of the eyes and respiratory tract. And even in small concentrations. It is allocated as a result of the functioning of factories. Its concentration in the air depends on the season and time of day. For example, during the day it is higher - due to the UV radiation from the sun, which activates certain chemical reactions.

How to achieve clean air in residential or office premises?

There are three main strategies for reducing indoor air pollution, which is listed below.

Get the pollutants out

Removing the source of contamination is the most effective method. It is easier to eliminate the cause than to deal with the consequences. For example, this could include removing a moldy piece of drywall, switching to fragrance-free cleaning products, or eliminating indoor smoking. In some cases, it is a good idea to remove dusty substrates such as upholstered furniture and carpets.

Improving ventilation can significantly improve the quality of the microclimate in an apartment. Fresh air in the apartment, rich in oxygen and low in carbon dioxide, will heal the atmosphere at home. However, it is important to understand that if the housing is located in a highly polluted area of ​​the city, then natural ventilation will not only not improve the environment, but may even worsen it. In this case, it is appropriate to resort to the Tion S3 breather. This device is convenient to use with closed windows, as it works on the basis of supply ventilation.

The simplest thing to do is to ensure clean air in homes, apartments, offices. After all, we spend most of the time inside the premises: we work, study, rest. Escaping the polluted air by tightly closing all the windows will not work. It still penetrates through the cracks - along with dust, bacteria, and other organic matter. And airing the room (provided that smog reigns in the city) will only aggravate the already deplorable situation. But there is an extremely simple and effective solution - air purifiers. These devices are considered universal. They help both in summer when the rooms are stuffy, and in winter, when moisture is lost, which causes a sore throat, dry eyes, lips, skin peeling, and even more difficulty breathing. But especially air purifiers help out in critical situations, for example, when there is a high concentration of carbon monoxide in the city.

According to the principle of filtration, several types of these devices are distinguished:

They work in different ways, but the result is the same - clean and healthy air will reign in the room. Air cleaners are produced in a wide range, which gives you the opportunity to choose the option that is optimal in terms of characteristics and price for your home or office.

We have long learned to use the energy of the sun for our own purposes. In developed countries, solar panels are used throughout, converting solar energy into electrical energy. In this way, you can not only power household appliances or heat objects. Solar panels are also relevant for factories or factories. And if the work of industrial enterprises is transferred to environmentally friendly sources of energy, it will become much easier to breathe in the city.

Approximately 70% of pollution is released into the air due to exhaust gas emissions from cars. It is logical that something needs to be decided here. The most reasonable option is to switch to electric cars or models that use environmentally friendly fuels. In Europe and the USA, people are increasingly preferring eco-cars. And in China, as a couple of years ago, the implementation of programs for the development of "green" transport was launched at the state level. In other words, the world understands the problem and tries to solve it. And in Ukraine, this is still only going.

Instead of massive deforestation, efforts should be made to conserve forests. At the very least, it is possible to annually increase the area for new plantings, create systems for the protection and monitoring of forest funds, and improve measures to prevent forest fires.

Air pollution concerns everyone and must be addressed at all levels. Yes, most of the responsibility lies with the state. After all, only it can implement programs for the conversion of solar energy into electrical energy, stimulate the transition from conventional cars to environmentally friendly ones, and preserve forests. But ordinary people do not expect miracles from the government and take everything into their own hands. Fortunately, in the modern market, there are effective and affordable options for solving this problem. For example, the same air purifiers, with the help of which you can at least provide yourself and all members of your family with clean and safe air for health.