An Early 2020 Influenza Outbreak in the US Gets Thousands Killed but can be Avoided. Learn how

The current situation in the USA is well-depicted on this chart: 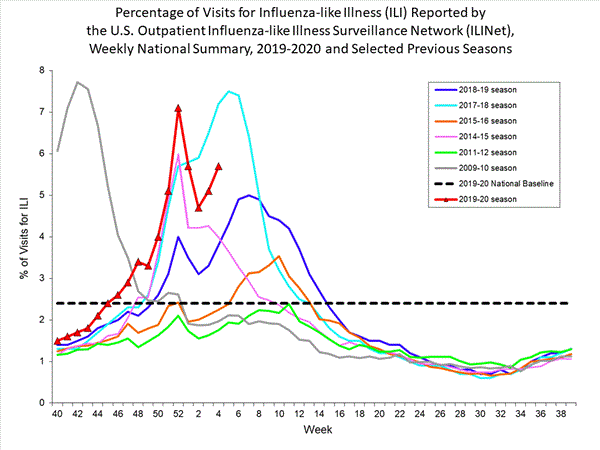 Epidemiologists claim the flu season is off to its rapid start in the US and as big as it has not been in fifteen years. An early onset of Influenza season 2019 - 2020 that has started in the South and spread broadly, keeps invading people’s homes and gaining lives.

The figures are preliminary since winter is not yet over. But 15-21 million patients, 7-10 million doctor visits and 8-20 thousand deaths speak for themselves (Centers for Disease Control, USA).

The current influenza season in the USA has been named one of the worst in recent years. This was stated by the director of the National Institute of Allergy and Infectious Diseases, Dr. Anthony Fauci.

According to data published by the organization’s Twitter account, at least 6.4 million people got the flu this season, 55,000 were hospitalized and 2,900 died. The 27 dead are children. 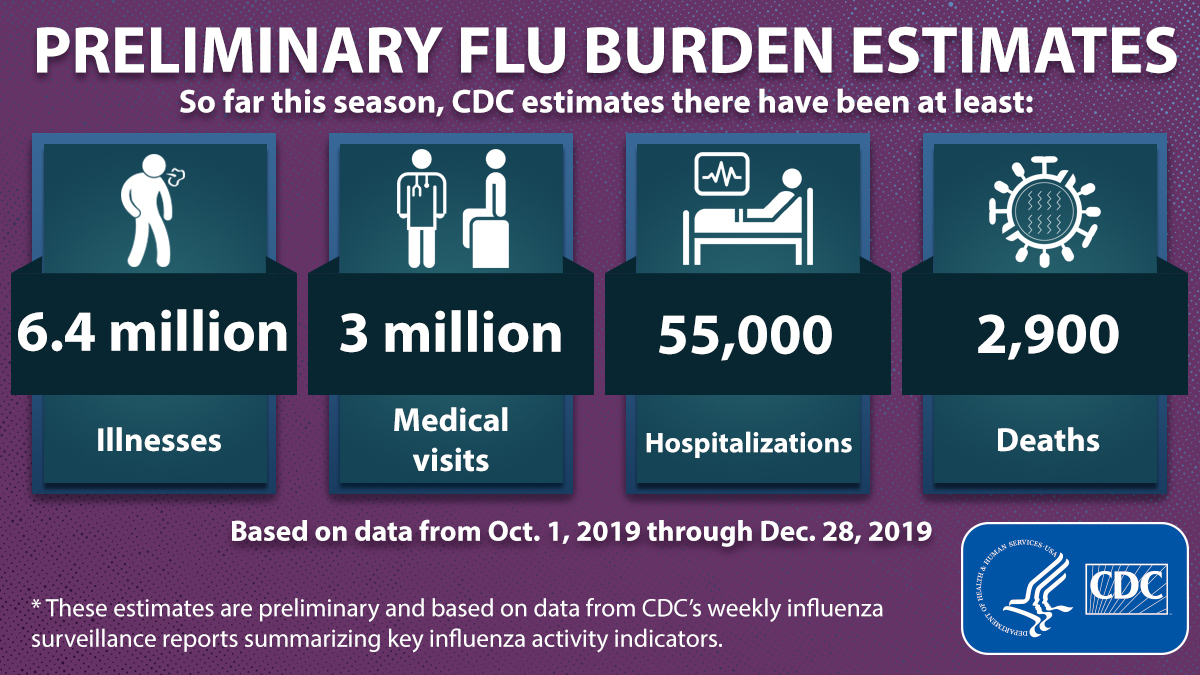 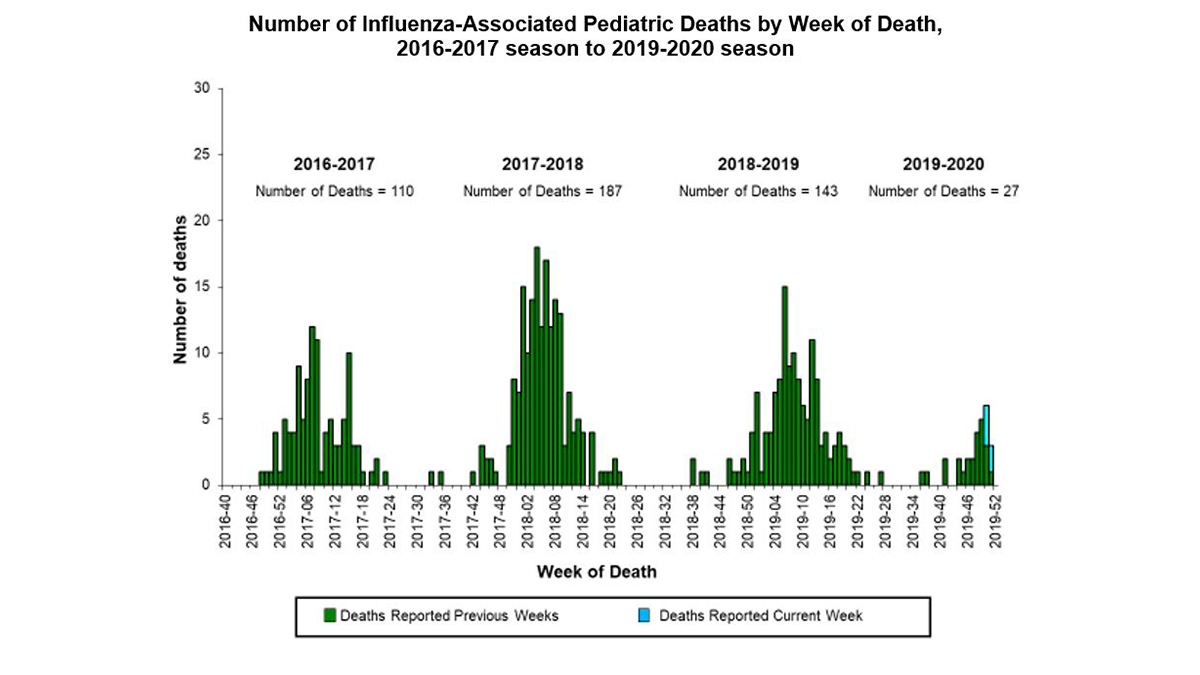 Speaking geographically, the first state who got his hard was Louisiana with the first bunches of patients with influenza-like symptoms appearing as early as October. A hospital in New Orleans claims to have seen more flu patients this past four months than they did the whole last year. The hospital’s authorities had to add extra shifts in December because of the epidemic. The most intense patient influx was noticed in the stretch of six states total: fr om Texas to Georgia. Researchers say it is the longest flu season in the last ten years.

In the United States influenza season normally peaks in October-November and January-February, but outbreaks can last until as late as March. The overall health impact varies from year to year though.

The 2020 influenza season is also said to be one of the worst one in decades. Flu cases and hospitalizations are holding up strong and are at a steady rise this month. The steep rise in flu activity may indicate the abrupt ending of the influenza season, but it is still hard to tell, says Dr. Anthony Fauci, director of the National Institute of Allergy and Infectious Diseases.

How Does a Virus Work?

With flu, the patient is normally a carrier of infection.

How long is the person contagious?

A day before the onset of the first symptoms of influenza and within two days after normalization of temperature.

How can you get flu?

The main route of transmission of any influenza virus is airborne. When coughing, the patient throws several hundred drops of aerosol with the virus into the air, and about 20,000 drops when he sneezes. The smallest of them (1-4 microns) hang in the air for several hours. During this time, the virus can die if it is the air that moves (outdoor air). Unfortunately, in a room with poor ventilation, it remains active for a long time.

What are the symptoms?

The disease manifests itself very clearly, so even at an early stage, it is simply impossible not to notice those. The first thing that happens is a sharp increase in temperature to around 103 Fahrenheit, pain in the muscles and joints (myalgia), the whole body aches very badly, drowsiness and general weakness appear, working capacity drops to almost zero. A person begins to sweat, chills appear, the throat turns red and dry, and the nose is stuffy. With an increase in temperature to 104 degrees and above, muscle cramps and hallucinations may occur. The temperature often lasts up to five days and does not always go even with antipyretic drugs.

How can you treat someone who seems to have gotten flu?

Initial flu treatment should start with a consult of a doctor - self-medication can be harmful!

But if you cannot get to a doctor try to stay in bed, get plenty of rest. Get your fluids. Plenty. Besides compensating for what you sweat out, your body also has to flush out toxins produced by your blood cells in attempts to fight the virus. Prevent dehydration by ventilating the room at most. If there is no way to find fresh air, install an air purifier. It does not only purify the air from viruses but also cleanses it for your better breathing. Ask your family to wipe the floors every couple of hours. Wet cleaning at home is a healthy habit overall. Once your fever reaches 102-103 Fahrenheit, start taking antipyretic drugs (paracetamol, ibuprofen).

What can I do to Protect my Family and Myself?

There are several pretty basic things you can do to keep you and your family protected. We also enforce you to try suggesting it to your friends and family.

The main things to do are:

How can an air Purifier and an Ozonator Help?

For additional protection against the virus, an air purifier can be installed in it. It should include a HEPA filter and the function of virus inactivation (destruction) on the filters. An air purifier does not supply fresh air from the street, but it destroys influenza viruses in the room itself. Air cleaning performance varies by model. A HEPA filter air purifier traps more than 95% of aerosol with viral particles. The inactivation function prevents the virus from remaining active on the filters.

Ozone in its turn destroys all microorganisms known to men: bacteria, viruses, spores, fungus. And it is also 51% stronger than chlorine and acts 15-20 times faster.

Getting an air purifier is a great idea all over. Due to its powerful air improving qualities, an air purifier with ozonator enables better air quality altogether. Infants, younger children, allergy patients, and elderly people all can benefit from such a device when the flu season is over.